Red Rock's are light to dark brownish red, depending on "where" they are caught. The further north you go to catch them, the more darker-toned shells they get. Red Rock's are much different species of crab than a Jonah Crab, but sometimes are hard to tell them apart. Both species of crab are found along the Atlantic coast all the way from Nova Scotia to the shores of Florida. Neither are sold in upscale fish stores or in the major supermarkets, but you may be able to find them in Spanish or Chinese markets. 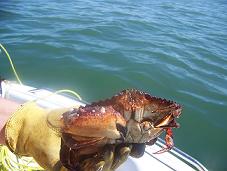 Red Rocks are most commonly found in the Puget Sound area of the Pacific Northwest. They are distinguished from other crabs, like the Dungeness Crab, by, not only the deeper red tones of the shell, but by the black tips on their claws.

These Jonah Crabs are not commonly found in the muddy or sandy areas as they lack the gill stainers that other crabs have. Their shells are very thick and hard to break. With that said, grab a good wooden crab mallet to break the shell!

Red Rocks can be pretty aggressive, even more so than their Dungeness relatives. It's best to wear a good pair of leather gloves when handling them.

Red Rock Crabs habitat in rock, gravel or kelp beds in bays or estuaries, or rocky areas where rocky headlands or outcrops provide some wave protection. They also lack gill straining apparatus required for living in muddy or sandy habitat, planktonic larvae dispersed by currents, and Red Rock juveniles remain in intertidal and shallow sub-tidal areas associated with macro-algae until their 2nd summer. They breed in inshore waters.

Go back to types of crab

Go back up to the top of Red Rock Crab