Dungeness Crab was recently ranked #20th on the list of top 25 food trends for 2013 by the popular food magazine, Bon Appétit magazine.

Dungeness is a type of crab that inhabits grass beds and water bottoms all the way from the Aleutian Islands in Alaska down through the Pacific Ocean waters of California and even into parts of the Gulf of Mexico. They are named after Dungeness, Washington, which is located near Port Angeles, WA, in the Puget Sound area. This area is where Captain George Vancouver explored in the Strait of Juan de Fuca along the northern area of Washington State's Olympic Peninsula in the late eighteenth century. Dungeness Crab is hailed as one of the most iconic foods in the Great Pacific Northwest! 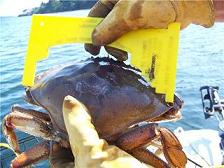 Dungeness Crab, AKA, "Dungies" can measure up to as much as 10 inches across the shell in some areas off the coast of Washington. However, they average under 8 inches in diameter across the shell. Though they have much smaller legs than the Alaskan King Crab or the Alaskan Snow Crab, they do have much bigger shell size and do contain a lot of meat. Dungeness can weigh on an average of 2-4 pounds, with 25 percent of that weight being meat. This makes the Dungeness species of crab a major domestic species.

Dungeness are a popular seafood delicacy, and are the most commercially important crab in the Pacific Northwest. They are also fished recreationally by thousands of crab lovers along the Pacific coastline as ourselves, here, at Crab-O-Licious.com!

Female dungeness are illegal to keep no matter what area you are crabbing in along the ocean. Not even commercial crabbers are permitted to keeping female dungies. Only males can be caught, whether by commercial crab fishermen or by non-commercial crabbers. This is to help keep the species available with such a high demand. It makes perfect sense, not only to protect the females, but also, females are much smaller in size than their males. They just don't have the "meat" that the males do, either.

The male crabs are attracted to their mates by pheromones (Will open into new window.) present in the urine of the female crabs. Upon locating an available female, the male initiates a protective pre-mating embrace that lasts for several days. In this embrace, the female crab is tucked underneath the male, oriented such that their abdomens touch and their heads face each other.

Mating occurs only after the female has molted, and the female signals her readiness to molt by urinating on or near the antennae of the male. The female dungeness crab extrudes the eggs from her body several months later and they remain attached under her abdomen for three to five months until they hatch. Young dungie crabs (juvenile) are free-swimming after hatching and they go through five larval stages before reaching maturity after about ten molts which can take up to 2 years.

Crabbing season for dungeness typically starts in late fall and runs till early spring, with the winter months being the most productive. Alaskan Dungeness season runs into the summer months, making this crab fishing a year around treat in the Pacific Northwest. You can find Dungeness Recreational Seasons and Harvest Rules here. It will open into a new window. You will also find the information you need about the crab catch card.

Dungeness Crab will stop eating when they are removed from their habitat, so keeping crab alive in their salt water for even a day will degrade their quality. The starvation process will make the meat spongy and will draw calcium from the shell, weakening the shell of the crab.

So to keep the crab alive after catching them, we always take a cooler with us and use a bucket to scoop the sea water out of the ocean and pour it into the cooler. Always keep enough water in the cooler to cover the crab completely. Also, if you are out on the water long, we always stir up the water in the cooler with the crab every now and then, making air bubbles. This will keep your crab alive until you get them home to clean the crab and get the crab boiled.

Dungeness are not sold as soft-shell crab, like Blue Crab are. Dungies are to be eaten from hard shell only.

If you would like to know more about how to catch dungeness crab, click here. Crab-O-Licious will give you the in's and out's of crabbing for Dungeness.

If you would like to know how to clean Dungeness, Crab-O-Licious.com has a video to show you how.

Click here to see our how to clean crab video.

Would you like to see more Types of Crab?

Go back up to the top of Dungeness Crab

Find one near you!