Alaskan King Crab, also known as, "stone crab" are the biggest and most sought after crustacean in the world. King Crab are popular for their huge legs that are graciously loaded with meat and their large, tasty, and meaty claws. Their preferred habitat is in the coldest waters in the world. King Crab is caught chiefly by commercial fisherman in various areas in the Pacific Ocean near Alaska...Bristol Bay, Norton Sound, St. Matthew Island and Pribilof Island's and the Kodiak Islands.

Alaska Crab Fishing is to this day the most dangerous job in the world. 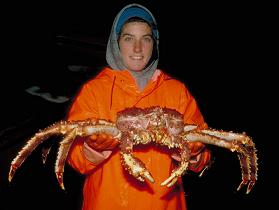 Back in the mid-1960's, Kodiak Island was Alaska's largest producer of king crab, landing nearly 91 million pounds in 1966. Since then, the stocks have declined significantly since the peak harvests of the king crab in the 1980's. Today there is no commercial king crabbing on Kodiak Island, but subsistence and sport crabbers on the island can still capture these wonderful tasty critters!

In the years after World War II, crabbing for kings developed as an important fishery in Alaska. These deep-sea creatures thrive well in the frigid waters of the Great North Pacific, and the treacherous ocean conditions there have helped make Alaskan king crab fishing among the most dangerous occupations in the world. The are 4 different species of Alaskan King Crab.

There are Blue King Crab that are a brownish color with hints of bluish hue on the shells. But when they are cooked, they turn a fire red color, pretty much like any other type of crab. The Blue King Crab are caught around the St. Matthew and the Pribilof Islands in the Alaska, great Pacific Northwest area.

The Golden King Crab, are caught off the Aleutian Islands. They are the smallest species of King Crab and the most abundant of the species. They are fished in the deepest waters of the North Pacific. It is generally sold as "king," though the legs are more uniformly reddish-orange while the other kings have a pale creamy color on the underside of their legs.

Red King Crab is the most popular and most abundant of the 4 species of King Crab. Their Alaskan King claws are absolutely huge and full of delicious, sweet white meat. These crab are dark red, but when cooked, they turn a bright-orange red. They are caught in the Alaskan cold waters around Bristol Bay and the Norton Sound area's. These huge king crabs generally range from 4 to a whooping 10 pounds!

The fourth species of King Crab is the Scarlet King Crab that is also caught in the Bering Sea, but is not caught commercially because of it's rare and smaller size of the king crab species.

King Crab Season runs during the cold winter months, mainly between October and January. The length of the seasons can vary from year to year, some lasting only a few days to some lasting a few weeks.

If you think you're up for the job, you can search Alaska Crab Fishing Jobs, here.

Find King Crab recipes, right here, on Crab-O-Licious.com. We will even show you how cooking king crab legs is a simple process. You can cook king crab legs yourself at home.

Check out other types of crab.

Go back to the top of this page, Alaskan King Crab     Find Alaska Crab Fishing Jobs