Alaskan King Crab season can run anywhere in the cold winter months of October to January every year.

For Alaskan crab fishermen, the crab fishing season is basically determined according to species and location.

According to the Discovery Channel, (via "Deadliest Catch"), for example, in Bristol Bay and the Bering Sea, different species of salmon can generally be caught in the summer months, but the crab fishing season is all over the map. Golden king crab (also known as, brown king crab) can usually be caught throughout the year from the middle of February to the middle of June, while Red and Blue Alaskan King Crab season opens for only short windows in the fall from November through January.

In the Arctic-Yukon-Kuskokwim area, the Red Alaskan King Crab season runs from July to the first part of September, then again around the middle of November thru the end of May.

In the Bristol Bay, Bering Sea, and Aleutian Islands area's, the king crabbing season runs as follows... For Red King Crab-Around the middle of October thru the middle of January.
For Brown King Crab-From around the first part of August thru around the end of May.

Opilio Crab ( AKA, Snow Crab) season is normally open throughout the coldest winter months through January starting around October. The Alaska King Crab season may last as long as 4 weeks or run as short as only 4 days.

In other parts of Alaska, the Alaskan King Crab fishing season is much different. Take the southeast portion of the state. Golden king crabs can only be caught in the spring, while red and blue king crab season is open throughout a good portion of the fall and in the early winter. Along the Alaskan Peninsula, the island chain that breaks away from the Alaskan mainland towards Russia where only Dungeness Crab and Alaskan Snow Crabs can be caught. The season for Dungeness is open throughout much of the summer and fall, while the Snow Crab season only opens during a short winter spell.

Each commercial crab fishing vessel is given a quota based on their catch from previous years, how many vessels are in the fleet, how much capacity each vessel can hold, and how many crabs are available to catch. 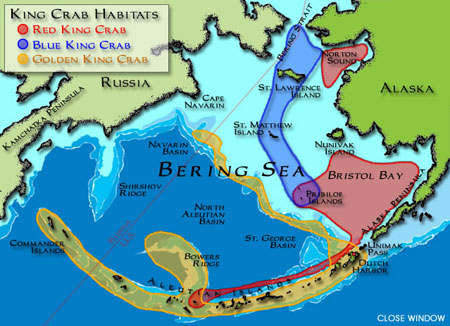 Did You Know ... 10 species of crab (not just King) are caught in the Alaskan Fisheries?

7 of these species have commercial importance: ﻿

So...Tell us, would you go Alaska Crab Fishing? Have you ever? Tell us below, inquiring minds want to know! ....

Check out more about the edible types of crab, here.

Check out this crab fishing season's charts Alaska's Crabbing season It will open into a new window.

Go back up to the top of Alaskan King Crab Season