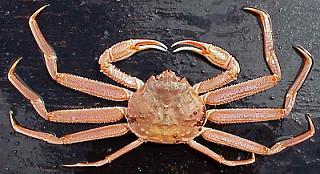 Alaskan Snow Crab, are famously known as, Opilio crab, (famously known from the T.V. show "The Deadliest Catch"), queen crab or tanner crab, depending on which area of the map you are from. They are also the type of crab you mainly find in a typical restaurant in a buffet line. (Photo courtesy of Wikipedia.com)

There are four species of Snow Crab, two species in the Alaskan water, the Chinonocecetes opilio and the C.bairdi. Snow Crab are mainly caught by Commercial fishermen fishing in the Bering Sea waters and the Chukchi Sea. Much of the crabs from there go to Japan. Their habitat, is in real cold waters. Like other crustaceans (shell fish), Snow Crab grow by molting when they shed their exterior, (shell/exo-skeleton). Then they grow tissue to fill each new, larger exo-skeleton. They molt several times per year when they are young but only once per year when they get larger and mature. The average snow crab weighs between 2 and 4 pounds.

Snow Crab Season
The Canadian season for snow crab is April through November. In the Bering Sea, the start of the season depends mainly on when the ice breaks. The Alaskan Crabbing season can extend well into the summer months.

Life Span of Snow Crab
Alaskan Snow Crab are long-lived compared to warm-water crab, like Dungeness Crab. They may not reach adulthood until 6 or 7 years of age and may live more than 10 years.

Reproduction of Snow Crab
As snow crabs grow older, they sometimes develop black patches on their shells and have a browner and less appealing appearance. These are often considered "a bargain" because people incorrectly assume that the meat of these crabs are less tasty.

Females have high reproductive potential and may produce up to several hundreds of thousands of eggs per year. However, when they stop growing, they molt one last time after reaching maturity. Their carapace width rarely grows beyond 3 inches. The male snow crab, however, can live up to 14 years and can reach up to 6 inches carapace width.

Distinguished Alaskan Snow Crab
The snow crab is also called "queen crab" because they are very long-legged like the Alaskan King Crab, but their carapace's and leg-width's are smaller than King crab, but much bigger than Dungeness or Blue Crab. They have flatter and smoother shells than the King Crabs.

If you ever watch "The Deadliest Catch" that runs on the History Channel, you will notice the difference between the two, King Crab and the Oplilio Crab, or Queen Crab. Both are very large crab, but when they catch a full pot of King they may only have 60 or 80 (average, they hope!) in their pots. But in a full pot of the opilio (snow) crab, they may have more than 200 in a pot. With this said, they are still relatively smaller than the Alaskan King Crab.

Crab-O-Licious.com will show you how to clean crab and how to cook crab legs. Plus, you'll find a lot of great snow crab recipes here as well.

Jump back up to the top of Alaskan Snow Crab or check out Alaska crab fishing jobs.

Go back up to Crab-O-Licious.com homepage.